The Wortprofil is located directly under the Thesaurus section of the word information page and displays a cluster of words that frequently co-occur with the search word (Typische Verbindungen zu “Herausforderung”). The display is formatted as a word cloud in which the size of the word corresponds to the frequency with which it co-occurs with the search term. Such frequent neighbors are called collocates in corpus parlance, and the combinations of the search word with its collocates are called collocations. 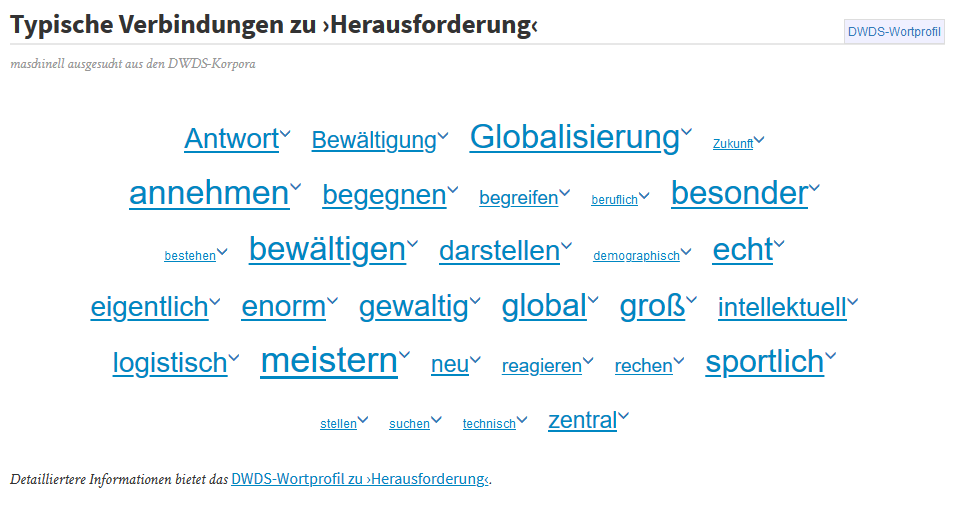 In the example above we can see that the words meistern, annehmen, and Globalisierung are most closely associated with Herausforderung because they are shown in the largest sizes. Just below the word cloud (at the very bottom of the page) you will find five random example sentences with Herausforderung from DWDS corpora. If you click on the downward arrow ˅ next to any collocate in the word cloud (e.g., echt), you will see five more sentences with the respective collocation (echte Herausforderungen).

Now let’s try another example. Using the DWDS search function and word cloud feature, determine which nouns frequently co-occur with the noun Internet, the adjective krass, and the verb erleben to answer the quiz questions below.

The overview list (Überblick) contains the same collocates that we saw in the word cloud, with the words that most frequently co-occur with Herausforderung (meistern, annehmen, and Globalisierung) appearing at the top of the list. The strength of this co-occurrence, or word association strength, is measured in DWDS with the logDice statistic listed to the right of each collocate and followed by their absolute frequency in DWDS. During our last search, for example, meistern was ranked as the top collocate of Herausforderung. This means that it appeared together with Herausforderung more frequently than annehmen, the second-ranked word, although the absolute frequency of annehmen was higher than that of meistern.

All other lists of collocates in this extended word profile view are organized by part-of-speech and syntactic role (i.e., we see lists of verbs, adjectives, nouns, genitive attributes, etc., that frequently co-occur with Herausforderung). Note that clicking on any word in these lists brings up 20 example sentences at the bottom of the page.  The expanded search functions at the top of the page also allows one to change some settings.  In the second row of choices, for example, one can change the minimum logDice or frequency value, sorting order (by logDice or frequency), view (list or word cloud), and number of shown collocations.

Now let’s try another example.  Using the DWDS search function and word cloud feature, find which words frequently co-occur with the noun Erlebnis and answer the questions that follow.

The expanded search functions allow for comparing the collocates of Herausforderung with those of another word. For example, type Problem in the comparison word field (Lemma Vergleichswort) and then click the blue Wortprofil abfragen button. The resulting “differences” view (Unterschiede zu) will divide the ranked lists of collocates by marking the most frequent collocates of Herausforderung with blue and those of Problem with red.

The results are clearest if you select the word cloud view by clicking on the cloud icon under Ansicht in the second row of options in the expanded search functions.

Now let’s try another example.  From the DWDS homepage, look up the word Erlebnis, scroll down to the word cloud and click on the link DWDS-Wortprofil zu “Erlebnis” underneath. Then, type Erinnerung in the comparison word field (Lemma Vergleichswort). Use this comparison page (like the one directly above) to complete the questions below.